Slots games developer Quickspin has produced a number of games with a fairy-tale theme, and the company’s Goldilocks slots game is no exception. Based on the classic children’s story of Goldilocks helping herself to the porridge she finds in a cottage in the woods, before she is surprised by the bear family that lives there, the game can be played online or via a mobile device, on both iOS and Android platforms.

The game is designed with cartoon-like animations against a “cottage in the forest background”, featuring Goldilocks herself, in two guises, as well as all of the three bears. Goldilocks video slots plays on five reels, each displaying three lines each, with 25 bet lines. Players can adjust both their bets per line and the number of lines they play, although of course they do need to play all 25 lines to stand the chance to win the biggest prizes.

The Goldilocks slots game uses the standard poker symbols 10, J, Q, K and A as low-scoring icons, displayed in a bright, simple font against weathered wooden shingles. The medium-value icons are the bear family, boldly caricatured: Poppa Bear, Momma Bear and Baby Bear, along with a stuffed Teddy.

Players need three or more matching symbols on a bet line, running consecutively from the left-most reel, to win anything, with the lowest win being 2X the bet for three 10s, Js or Qs, and the highest win in regular play paid out for five Poppa Bears on one line: it pays 250X the bet. The game has two Wild symbols.

The Bears’ Cottage is the regular Wild, substituting for any other symbols except the two different Scatter symbols explained later. Wilds in succession on a bet line also win their own score; from 5X for two Wilds to 1000X for five Wilds on one line. The Multiplier Wild, represented by a bowl of steaming porridge, functions the same as a regular Wild, but its appearance also applies a multiplier to any winning bet lines it appears in: X2 if one Multiplier Wild appears, X3 for two and X4 for three of them. 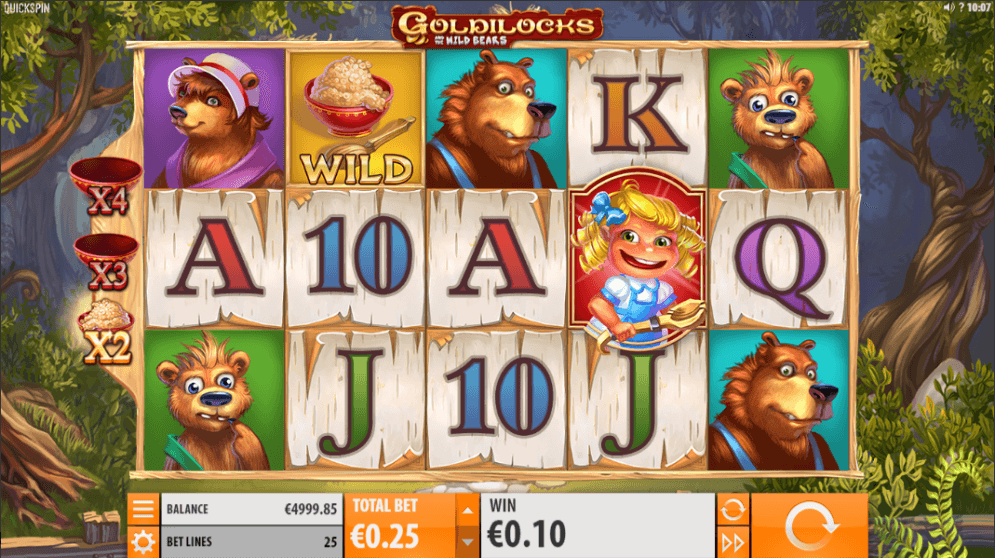