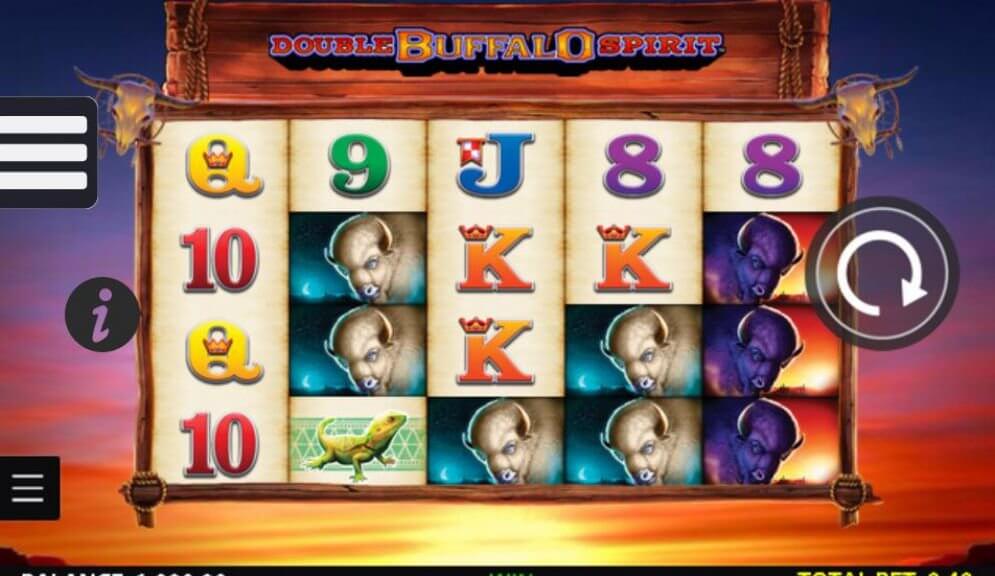 With its wood-frame reels decked in buffalo skulls against an impressive Western sunset, Double Buffalo Spirit from developers WMS Gaming evokes a Native American ethos, from those lands where the great plains give way to scrub and desert. The double buffalos of the title are the two highest-paying symbols in base play; a purple-lit buffalo at sunset, and a blue-tinged buffalo at moonrise.

The two buffalos face in different directions, but a unique feature is their ability to make mixed combinations. A sequence of two or more buffalos, of whatever colour, wins a prize; up to 30X the line bet for five of a kind. Five identical buffalos, either blue or purple, win 125X the line bet. The WMS Any Way feature, which allows combinations to run left to right from Reel 1 and right to left from Reel 5, also helps to create more wins in base play.

Double Buffalo Spirit uses no standard paylines; as long as combinations start on Reels 1 or 5 and match at least three icons, or two buffalos, in any one of the windows on each adjacent reel, a prize is won. As each reel contains four windows, this results in 1,024 possible winning combinations, from two buffalos or three 8s, all the way up to five buffalos.

More Poker Icons than Most Slots

Unusually, Double Buffalo Spirit uses seven Poker icons, from A all the way down to 8. Apart from the buffalos, only three other icons feature in ordinary play, all theme-related: an iguana, a gopher and an eagle. The eagle is the most valuable, paying 20X, 40X and 80X the line bet for three, four and five of a kind respectively.

A gold buffalo figurine serves as the Wild in Double Buffalo Spirit, and as usual it will stand in for any other symbol except the Bonus Scatter to form extra winning combinations. It can appear on Reels 2, 3 and 4 only, but the Any Way style of creating winning combinations in both directions, no matter which windows matching icons occupy on adjacent reels, can make multiple Wilds quite lucrative.

The Scatter is a shaman wearing a buffalo skull, summoning the buffalo spirits of the title, and it pays a prize when three or more Scatters occur anywhere on a spin. These prizes are 80X, 400X or 800X the line bet for three, four or five of a kind.

Three, four or five matched Scatters also trigger 8, 15 or 20 free spins. During free spins, two or more Scatters will retrigger the spins in numbers that vary from 5 to 20 additional spins.

Also during free spins, any Wilds that land in winning combos reveal a multiplier of X2 or X3 applied to the win, and these multipliers are added together if more than one Wild lands in the same combo. So players can rack up prizes increased by X4, X5, X6, X7, X8 or even X9 in this phase.